Varicose veins are a very common condition, which tends to affect people from middle age.  They appear as unsightly, enlarged, tortuous veins, just under the skin of the legs. 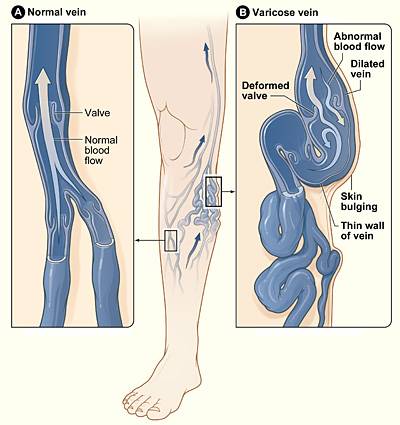 An abnormal communication between the deep and superficial venous systems of the legs appear to be the major factor in the development of varicose veins.  In most cases, it begins with the failure of the valve at the sapheno-femoral junction.  When this occurs, an uninterrupted column of blood from the heart progressively dilates the veins down the leg, causing them to enlarge and bulge just under the skin.   These veins also have one-way valves to prevent blood from flowing backwards.  When these valves are faulty, they allow blood to flow backwards, thereby causing blood to pool in the leg.

Women are affected about 6 times more often than men, with the majority developing during or soon after the second or third pregnancy.  In some patients, hereditary factors appear to play a part.  Certain conditions, such as obesity and prolonged standing, also increase the likelihood of varicose veins developing.

What Are The Symptoms?

Some patients with varicose veins have no symptoms, other than the veins being unsightly.  Others may experience any of the following:

• Aches or heaviness in the legs, especially at the end of the day, or after prolonged walking or standing

• Swelling in the legs

• Itching of the skin around the varicose veins

• Bleeding from the varicose veins due to minor injury

How Is It Diagnosed?

Varicose veins are diagnosed based on a good history and detailed physical examination.  A duplex ultrasound may be used to determine the exact nature of the reflux and to help locate the position of the damaged valves.  This is a non-invasive and painless test, which may be carried out at the doctor's office.

Once this information is available, the surgeon is then able to determine the best treatment option for you.

How Is It Treated?

The general aim in treating varicose veins is to reduce symptoms and prevent complications.  For some, the goal may be to improve appearance.

• Elevate your legs as much as possible.  Ideally, your legs should be raised up above the level of the heart to achieve maximum effect.

• Wear compression stockings (eg. Ted stockings).  These should be worn the first thing in the morning, before you start walking.  Try to keep them on til the end of the day if possible.  The downside of wearing these compression stockings in very hot climates such as in Singapore, is that they tend to be very warm and uncomfortable.

• Lose weight if you are overweight.

• Avoid activities which result in straining or bearing down (such as lifting of heavy loads).  Conditions which cause straining, such as constipation or chronic coughing, should also be treated and avoided.

• Do not cross your legs when sitting.

• Avoid wearing girdles or belts which are too tight.

Treatment may be necessary to remove damaged veins, correct an underlying problem that is causing the varicose veins, as well as to treat complications which may arise. In general, larger varicose veins are treated with surgery (ligation and stripping), endovenous laser, or radiofrequency treatment. Smaller varicose veins and spider veins may be treated with sclerotherapy or laser therapy.  In some cases, a combination of treatments may be used.

Conventional surgery involves the removal of the varicose veins through an incision in the groin.  This technique will leave not only scars from the incisions, but also a significant amount of bruising and possibly bleeding. Pressure dressing is applied around the leg in order to control the bleeding. The bruising is usually noticeable for a few weeks.

EVLT is a relatively new treatment method for varicose veins, which has been found to be safe, fast and effective, with minimal downtime.  A fine needle puncture is made into the vein, and through this puncture, a laser fibre is inserted into the vein with guidance from an ultrasound machine. The laser is used to cauterise the inner lining of the damaged vein at multiple locations, thereby causing it to collapse and close.

A chemical (sclerosant) is injected into a varicose vein, using a fine needle.  The sclerosant causes fibrosis of the vein, thereby causing it collapse over time.  This technique usually works best for small veins.  This procedure may require multiple sessions, and may be performed independently or together with EVLT.

This procedure involves making small incisions along the varicose veins, and removing them using special surgical instruments.  This is performed under local anaethesia, and may also be performed independently or together with EVLT.

Radiofrequency ablation is a similar technique to EVLT, but instead of using a laser, it uses heat to destroy the vein. The probe is placed in the vein under ultrasound and once in position, the vein is heated along the entire length.