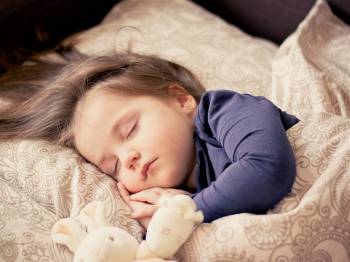 Serous otitis media (also known as otitis media with effusion, OME) refers to fluid collection in the middle ear space in the absence of infection.

This fluid in the middle ear prevents the tympanic membrane (ear drum) from moving normally, thus affecting hearing. This retained fluid is also more susceptible to getting infected.

• Upper respiratory tract infections, such as a common cold or flu

• Irritants such as cigarette smoke

• Rapid changes in air pressure, such as descending in an airplane

Young children tend to be more prone to developing serous otitis media in part due to their ear anatomy. Being smaller in size, their eustachian tubes are naturally shorter. The tubes are also more horizontal, floppier and have smaller openings, making them more susceptible to blockage and fluid accumulation.

Recurrent otitis media may be associated with blockage of the Eustachian tubes due to enlarged adenoids (collection of lymphoid tissue located where the throat and nasal passages meet) in children. It has also been found that children who are breastfed are less likely to develop otitis media.

An uninfected serous otitis media is painless, so small effusions may go unnoticed. Older children and adults may complain of decreased hearing, fullness in the affected ear or tinnitus.

If left untreated, serous otitis media can get infected. If this happens, there will be pain in the affected ear, often associated with fever. Younger children may look very unwell, often presenting with vomiting and fever.

Physical examination and some simple tests may reveal the fluid collection. Testing for hearing loss using a tuning fork will show a "conductive hearing loss" in the affected ear. Examination with an otoscope may show fluid behind the ear drum, air bubbles, reduced reflectivity, or reduced movement. 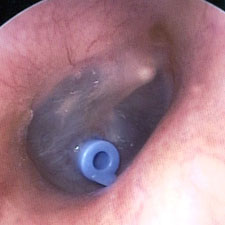 The first step to treatment is to avoid any aggravating factors. This would include avoiding exposure to dust, pollen, smoke and other potential allergens. Breastfed infants should be encouraged to continue breastfeeding.

If a child has recurrent or persistent serous otitis media, he/she should be seen by an ENT specialist to assess the need for the insertion of a small ventilating tube (grommet) - see picture above. Grommets are tiny tubes inserted in the tympanic membrane. Their main purpose is to promote ventilation of the middle ear rather than draining of the fluid. Grommets tend to remain in position for about 6 to 18 months, afterwhich they are extruded spontaneously.

If adenoids are deemed to be the cause of recurrent serous otitis media, your doctor may advise for their removal.