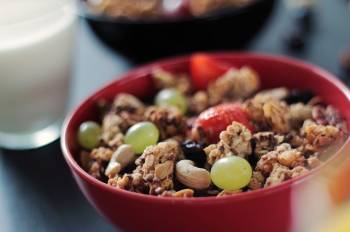 Not all carbohydrates are created equally.  Based on their structure and various properties, they can behave very differently in our bodies.  For example, a glass of apple juice will cause a much larger spike in blood sugar compared to a bowl of cereal,  which takes longer because of the type of carbohydrate and amount of fiber it contains.

The glycaemic index (GI) is how we rank these carbohydrates according to their effect on the blood glucose levels.  It estimates how much each gram of available carbohydrate (total carbohydrate minus fiber) in a food raises a person's blood glucose level following consumption of the food, relative to consumption of glucose.  On the glycemic index scale, each food is assigned an index number from 1-100, with 100 as the reference score for pure glucose. Typically, foods are rated high (greater than 70), moderate (56-69), or low (less than 55).

Foods that contain carbohydrates which break down quickly have high GI values.  Eating these foods cause a rapid spike in blood glucose levels as they are very quickly digested and absorbed.  On the other hand, foods containing carbohydrates that break down slowly (i.e. those which have low GI values) release glucose gradually into the bloodstream.

Some Useful Facts About Carbohydrates:

Carbohydrates are a vital source of energy found in fruit, vegetables, cereals and grains.  Glucose, the simplest form of carbohydrate, is the universal fuel for our bodies and is the only fuel source for our brain, red blood cells and the growing fetus.  It is also the main source of energy for our muscles during exercise.

When we eat carbohydrate-containing foods like bread and rice (made up of "complex carbohydrates"), our digestive tract breaks them down to glucose before it is absorbed into the blood stream.  A rise in blood sugar level sends a signal to the pancreas to secrete a hormone called insulin.  Insulin's job is to drive glucose out of the blood an into the cells.  Once inside the cells, glucose will be either used as a quick source of fuel (if required at the time), or stored as glycogen for later use.

So What About GI And Health?

Studies have shown that people who followed a low-GI diet over many years were at significantly lower risk of  developing both coronary heart disease, Type II diabetes and age-related macular degeneration.  It is believed that repeated spikes in glucose levels following a high-GI meal promote these diseases by increasing the systemic glycative stress and oxidative stress to the blood vessels.

Low-GI foods also take longer to absorb and help you feel full longer, so you are less likely to overeat.  High-GI foods, on the other hand, break down faster, leaving you hungry and less satisfied.  Recent animal research provides compelling evidence that high-GI carbohydrate is associated with increased risk of obesity.

In 2010, a study published in the New England Journal of Medicine found that foods with high glycaemic index in combination with higher protein, helped overweight adults in eight European countries maintain their weight.

A 2008 report, which analyzed data from 37 studies and was published in the American Journal of Clinical Nutrition, linked low-GI diets to lower risk of heart disease, diabetes, and some cancers.

Factors That Affect The GI Value Of Foods

Putting It To Work

By simply substituting high GI foods with lower GI alternatives will help reduce the overall GI of your diet.  Below are some ideas on making such a switch based on the more commonly eaten carbohydrate food groups.

There is no need to get too hung up over numbers.  Simple common sense should apply and in general, you shouldn't go far wrong if you select healthy, less processed, wholesome carbohydrates.  Use the glycaemic index to help you in your choices.

1. The GI only relates to carbohydrate-rich foods.

There is no point wondering what the GI of chicken or fish is ... there isn't one.  These food are rich in protein/fat and have negligible carbohydrates, so the GI value does not apply.

2. The GI is not to be used in isolation.

High GI foods, such as potatoes and rice, are still important parts of the diet.  Just because a food has a high GI doesn't mean that it should be excluded completely from your diet.  Where possible, high GI foods should be substituted for a lower GI alternative.  The nutritional benefits of different foods are many and varied.  Base your diet on a wide variety of foods which are high in fibre, have a low GI, and low in salts and saturated fat.

3. There is no need to add up the GI of your meals each day.

There is no need to get too caught up by the numbers.  Simply taking note of whether a food is low, medium or high GI and choosing the lower option, will have its benefits.

4. There is no need to get obsessed about the precise GI values.

Whether a food's GI is 52 or 55 probably isn't very biologically relevant, because normal variations in how your body digests and metabolizes foods could obscure the difference.  In general, only variations in the GI of 10 points or more would be considered significant.