The electrical abnormality in Wolff-Parkinson-White Syndrome may be identified on an electrocardiogram. 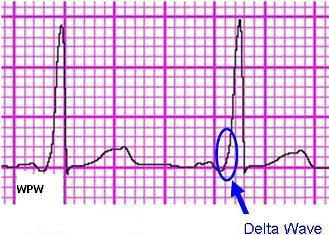 What are the symptoms?

Symptoms of Wolff-Parkinson-White syndrome are the result of the rapid heart rate. Symptoms most often occur for the first time when people are in their teens or twenties.

• Palpitations
• Giddiness
• Feeling faint
• Tiring easily during exercise
• Anxiety
• An episode of a very rapid heartbeat can occur suddenly and last for a few seconds to several hours. Episodes often happen during exercise. Sometimes these episodes may be triggered by the intake of alcohol or caffeine.

Over time, symptoms of WPW may disappear in as many as 25 percent of people.

Some people with Wolff-Parkinson-White Syndrome may experience a more serious forms of tachycardia which can be dangerous.

Symptoms in more-serious cases may include:

People with WPW who experience severe symptoms (eg. low blood pressure, lethargy with altered mental status) may require synchronized electrical cardioversion. However, in those who are relatively stable, pharmacologic treatment may be used.