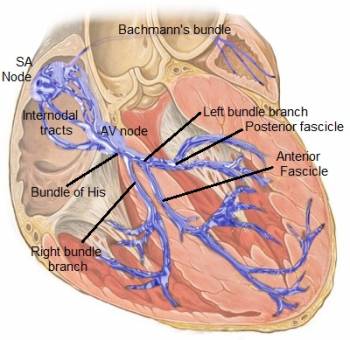 This coordinated contracting of the heat is directed by the heart's electrical system. The electrical impulses begin in an area called the sino-atrial (SA) node, found in the upper part of the right atrium. When the SA node fires, an electrical impulse passes through the right and left atria, causing them to contract.

A normal heart has a constant, regular rhythm, beating at about 60 to 100 times per minute, when at rest.

What Is Atrial Fibrillation?

Atrial fibrillation (AF) is a common rhythm abnormality of the heart. Over the years, the incidence of atrial fibrillation is increased, in both the developed and developing world. If you have AF, electrical impulses do not arise normally in the SA node as described above. Instead, many impulses begin simultaneously and spread through the atria and compete for a chance to travel through the AV node. This results in a very rapid, disorganized and irregular heartbeat.

1. Paroxysmal AF - this means that the episodes of AF terminate spontaneously and usually last less than 7 days.

3. Permanent AF - this refers to AF which failed cardioversion (ie. conversion to normal rhythm) or in which cardioversion was not attempted.

4. Non-valvular AF - AF which occurs in the absence of any disease involving the heart valves.

5. Lone AF - this refers to AF occurring in a young person with no evidence of any significant disease.

What Are the Symptoms of Atrial Fibrillation?

Some patients with AF may be totally asymptomatic. Others may have some of the following bothersome symptoms:
• Palpitations
• Chest discomfort
• Shortness of breath
• Fatigue
• Giddiness

What are the Risk Factors for Atrial Fibrillation?

Why is Atrial Fibrillation Dangerous?

Atrial fibrillation is dangerous because it significantly increases the risk of strokes. Someone with AF is about 3 - 5 times more likely to have a stroke than someone who does not have AF. Uncoordinated heart contractions result in pooling of blood within the atria. This pooling can cause clot formation, and if this gets dislodged and pumped into the bloodstream, it can potentially travel to the brain and cause a stroke.

Other than increasing the risk of strokes, atrial fibrillation can also lead to heart failure.

How is Atrial Fibrillation Diagnosed?

After a thorough interview and physical examination, your doctor will order some simple investigations. An electrocardiogram is a test that checks for problems with the electrical activity of the heart, and can be used to diagnose atrial fibrillation.

Your doctor may also order other test, including some blood tests, a chest X-ray or an echocardiogram. These may be required to find out if there is an underlying problem which may have caused the atrial fibrillation, as well as to assess the function of the heart.

The management of atrial fibrillation seeks to achieve 3 main goals:
1. Slow down the heart rate
2. Restore and maintain the normal rhythm of the heart, and
3. Preventing stroke

If you have severe symptoms as a result of your atrial fibrillation, such as shortness of breath or chest pains, together with a decreased blood pressure, your doctor will generally need to give you medication intravenously.

If, however, you have only mild symptoms, medication may be administered orally to control your heart rate. The beta-blockers are commonly used to slow down the heart rate.

Anti-arrhythmic medication, such as amiodarone, are prescribed to achieve this. The alternative to drug therapy is radiofrequency ablation for atrial fibrillation, however, current medical guidelines still recommend ablation for AF as second-line therapy, meant for patients who have failed drug treatment.

Most people with atrial fibrillation take the blood-thinning agent called Warfarin, which has been proven to be superior to other forms of medication for stroke prevention. However, as taking warfarin is not without problems and inconveniences, the search for an alternative to warfarin for stroke prevention in AF, has been ongoing for some time.

For most people with atrial fibrillation, relatively simple treatment measures will dramatically reduce the risk of strokes. Hence, it is essential that you seek medical treatment early if you suspect you may have the condition.