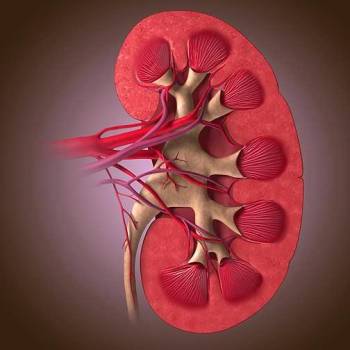 Several types of cancer can start in the kidney. Renal cell cancer is the most common type of kidney cancer in adults. It is sometimes called renal adenocarcinoma or hypernephroma. Another type of cancer, transitional cell carcinoma, affects the renal pelvis. It is similar to bladder cancer and is often treated like bladder cancer. Wilms tumor is the most common type of childhood kidney cancer. It is different from adult kidney cancer and requires different treatment.

When kidney cancer spreads outside the kidney, cancer cells are often found in nearby lymph nodes. Kidney cancer also may spread to the lungs, bones, or liver. And it may occasionally spread from one kidney to the other.

Who Are At Risk of Kidney Cancer?

Kidney cancer develops most often in people over 40, but no one knows the exact causes of this disease. Doctors can seldom explain why one person develops kidney cancer and another does not. However, it is clear that kidney cancer is not contagious. No one can "catch" the disease from another person.

Research has shown that people with certain risk factors are more likely than others to develop kidney cancer. A risk factor is anything that increases a person's chance of developing a disease.

Studies have found the following risk factors for kidney cancer:

• Smoking: Cigarette smoking is a major risk factor. Cigarette smokers are twice as likely as nonsmokers to develop kidney cancer. Cigar smoking also may increase the risk of this disease.

• Obesity: People who are obese have an increased risk of kidney cancer.

• Long-term dialysis: Dialysis is a treatment for people whose kidneys do not work well. It removes wastes from the blood. Being on dialysis for many years is a risk factor for kidney cancer.

• Occupation: Some people have a higher risk of getting kidney cancer because they come in contact with certain chemicals or substances in their workplace. Coke oven workers in the iron and steel industry are at risk. Workers exposed to asbestos or cadmium also may be at risk.

• Gender: Males are more likely than females to be diagnosed with kidney cancer. Each year in the United States, about 20,000 men and 12,000 women learn they have kidney cancer.

Most people who have these risk factors do not get kidney cancer. On the other hand, most people who do get the disease have no known risk factors. People who think they may be at risk should discuss this concern with their doctor. The doctor may be able to suggest ways to reduce the risk and can plan an appropriate schedule for checkups.

Most often, these symptoms do not mean cancer. An infection, a cyst, or another problem also can cause the same symptoms. A person with any of these symptoms should see a doctor so that any problem can be diagnosed and treated as early as possible.

If a patient has symptoms that suggest kidney cancer, the doctor may perform one or more of the following procedures: 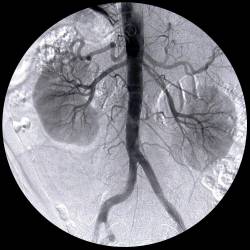 • Physical exam: The doctor checks general signs of health and tests for fever and high blood pressure. The doctor also feels the abdomen and side for tumors.

• Urine tests: Urine is checked for blood and other signs of disease.

• Ultrasound test: The ultrasound device uses sound waves that people cannot hear. The waves bounce off the kidneys, and a computer uses the echoes to create a picture called a sonogram. A solid tumor or cyst shows up on a sonogram.

• CT scan (CAT scan): An x-ray machine linked to a computer takes a series of detailed pictures of the kidneys. The patient may receive an injection of dye so the kidneys show up clearly in the pictures. A CT scan can show a kidney tumor.

• Surgery: In most cases, based on the results of the CT scan, ultrasound, and x-rays, the doctor has enough information to recommend surgery to remove part or all of the kidney. A pathologist makes the final diagnosis by examining the tissue under a microscope.

To plan the best treatment, the doctor needs to know the stage (extent) of the disease. The stage is based on the size of the tumor, whether the cancer has spread and, if so, to what parts of the body.

Staging may involve imaging tests such as an ultrasound or a CT scan. The doctor also may use an MRI. For this test, a powerful magnet linked to a computer makes detailed pictures of organs and blood vessels.

• Stage I is an early stage of kidney cancer. The tumor measures up to 7 centimeters. The cancer cells are found only in the kidney.

• Stage II is also an early stage of kidney cancer, but the tumor measures more than 7 centimeters. The cancer cells are found only in the kidney.

• Stage IV is one of the following: The tumor extends beyond the fibrous tissue that surrounds the kidney; or Cancer cells are found in more than one nearby lymph node; or The cancer has spread to other places in the body such as the lungs.

• Recurrent cancer is cancer that has come back (recurred) after treatment. It may come back in the kidney or in another part of the body.

Many people with kidney cancer want to take an active part in making decisions about their medical care. They want to learn all they can about their disease and their treatment choices. However, shock and stress after the diagnosis can make it hard to think of everything they want to ask the doctor. It often helps to make a list of questions before an appointment. Some also want to have a family member or friend with them when they talk to the doctor

Treatment depends mainly on the stage of disease and the patient's general health and age. The doctor can describe treatment choices and discuss the expected results. The doctor and patient can work together to develop a treatment plan that fits the patient's needs.
spacer

Surgery is the most common treatment for kidney cancer. It is a type of local therapy. It treats cancer in the kidney and the area close to the tumor.

An operation to remove the kidney is called a nephrectomy. The doctor can explain each operation and discuss which is most suitable for the patient:

• Radical nephrectomy: Kidney cancer is usually treated with radical nephrectomy. The surgeon removes the entire kidney along with the adrenal gland and some tissue around the kidney. Some lymph nodes in the area also may be removed.

• Partial nephrectomy: The surgeon removes only the part of the kidney that contains the tumor. This type of surgery may be used when the person has only one kidney, or when the cancer affects both kidneys. Also, a person with a small kidney tumor (less than 4 centimeters) may have this type of surgery.