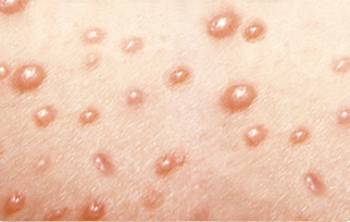 Chickenpox is a common illness, caused by the varicella-zoster virus, that causes an itchy rash and red spots/blisters (pox) all over the body. It is most common in children, but one can get chickenpox later on in life if one has not had the chickenpox vaccine.

Chickenpox is generally a mild, self-limiting disease in healthy children but it can cause problems for pregnant women, newborns, adults, and people who have lowered immunity.

Chickenpox is highly infectious for 1-2 days prior to the onset of rash, up until 5-7 days after the appearance of the vesicles until scabbing occurs.

Chickenpox is highly contagious. It is spread mainly via the airborne route (through respiratory secretions from coughing or sneezing), but may also be transmitted via direct contact with the fluid from vesicles.

Chickenpox often begins with a fever, bodyaches, headache and general feeling of lethargy. Other symptoms may include fatigue and a loss of appetite. The typical rash of chickenpox usually appears 1 to 2 days later. The fever usually abates once the rash has completely appeared. Occasionally, there may be the appearance of rash without any of the usual preceding symptoms.

The chickenpox rash goes through several stages. It generally begins as a reddish bump or blister, then it bursts, dries up and crusts over. Groups of new lesions appear in crops over 4 to 7 days. In general, the scalp, face, limbs and trunk tend to develop the rash, whilst sparing the palms and soles. Occasionally, there may be involvement of the oral mucosa and conjunctiva (outer covering of the eye).

1. Bacterial skin infections - secondary bacterial infection of the vesicles/rash may occur, and if it develops, antibiotics is usually required

4. Hepatitis - this generally occurs in those who are immunocompromised

5. Reye syndrome - occurs in children with aspirin use

(i) Infection with the chickenpox virus in early pregnancy (8 - 20 weeks) carries a 2% risk of congenital malformation.

(ii) Infection in the later stages of pregnancy predisposes the infant to herpes zoster.

(iii) If the mother develops chickenpox within 5 days prior to delivery and within 48 hours post delivery, the newborn is predisposed to severe neonatal infection and the use of VZIG prophylaxis is indicated.

Your doctor will ask you about your symptoms and proceed to examine you. This is usually sufficient to make the diagnosis of chickenpox. In the very early stages, it may be difficult for your doctor to confirm the diagnosis, so you may be asked to return for review in 24 hours.

Very occasionally, should there be a need for more timely confirmation of diagnosis (eg. in a pregnant mother where the use of VZIG is being considered), or in atypical cases, viral antigen detection by immunofluorescence (IF) or polymerase chain reaction (PCR) can be done from vesicular fluid or cell smears.

Most uncomplicated cases may be treated symptomatically with anti-pyretics (for fever/pain), and anti-histamines (for itch). Anti-virals (eg. acyclovir, famciclovir and valcyclovir) may be used to treat chicken pox, and in uncomplicated cases, they have been shown to cause shorter periods of new lesion formation, fewer lesions, and more rapid healing but only if started within 24 to 48 hours of the onset of the rash. Oral anti-virals is more strongly recommended for children with underlying skin disease such as eczema, newborns, adults, and in those who smoke, as these groups have a higher risk of complications from chickenpox infection. Intravenous acyclovir is used in those who are immunocompromised.

Proper hygiene and isolation of infected individuals are key to preventing the spread of chickenpox. One can transmit the virus via respiratory droplets, or via direct contact with the lesions during the infective period (see above). Fortunately, the varicella virus is susceptible to disinfectants, desiccation and heat, so simple hygiene measures like washing with soap can kill the virus.

Vaccination against the varicella virus can prevent one from contracting chickenpox, and it is recommended for those who are non-immune to chickenpox, especially in those who are at increased risk of contracting the disease (e.g. healthcare workers and those living in institutional settings).

Vaccine dosage regimes are as follows:

As the chickenpox vaccine is a live attenuated viral vaccine, it should not be used in those who are severely immunocompromised or in pregnant women.

Varicella-zoster immune globulin (VZIG) provides maximum benefit when administered as soon as possible after exposure to the varicella virus. However, it may still be effective up to 96 hours after exposure.

VZIG may be considered in certain conditions eg. in newborns whose mothers had onset of chickenpox within 5 days before and 2 days after delivery.

Varicella vaccination may be effective in preventing illness or reducing severity if used within 3 days, and possibly up to 5 days of exposure.