Up Close And Personal With Dr Ang Peng Tiam 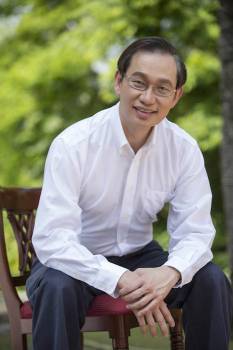 Parkway Cancer Centre’s Medical Director Dr Ang Peng Tiam talks about his work and his hopes for the profession.

Why did you choose to be a medical oncologist?

Why did you choose to be a medical oncologist?

After I finished my training, I was actually planning to go into cardiology because it was very popular at the time.

However, the Director of Medical Services, Dr Kwa Soon Bee, spoke to me and explained that there was a dire need to develop three medical disciplines in Singapore – one of which was oncology.

He said he needed people who had the capability to lead it and he promised that I could try it out for six months. “If you don’t like it, you can go to cardiology,” he promised me.

After six months, I told him that oncology was very interesting and I stayed on.

At that time, medical oncology was a new discipline in Singapore. There was no department of medical oncology. I spent a year at the Singapore General Hospital (SGH) and was then awarded a scholarship to the MD Anderson Cancer Center in Houston.

While I was there, I met Professor Saul Rosenberg of the Stanford University Medical Center and he offered me a paid fellowship position at Stanford. He told me I would be the first overseas paid fellow.

I came back to Singapore in 1990 and two years later, I became the founding head of the Department of Medical Oncology at SGH. In fact, at the time, I was the only trained medical oncologist at SGH.

When I left SGH in 1997, there were just 20 medical oncologists in the whole of Singapore and SGH had 12 of them.

What would a typical day look like for you?

What would a typical day look like for you?

Typically, I would be in the hospital before 7 am to see all my inpatients. By 8.30 am or 9 am, I start my clinic and I will work until around 6 pm. Before going home for dinner, I will drop in on some of the sicker patients to check on them.

My clinics run from Monday to Friday. On Saturday and Sunday, while I do not have a clinic, I still do my rounds. And even when I am not at the clinic or in the hospital, I am always contactable through the 24-hour answering service. Patients can always get me as long as I am in Singapore, even at 3 am.

Apart from being a doctor, you are also the Medical Director of PCC. How do you balance these roles?

Apart from being a doctor, you are also the Medical Director of PCC. How do you balance these roles?

As far as I am concerned, my primary role is that of a doctor. Some 90 per cent of my time is spent on patient care. All the doctors who are recruited into PCC are all very senior consultants in their own right, and as a medical director, my job is more administrative than supervisory.

I provide some guidance for the direction the group wants to go, and I have a very good team of senior partners so I am able to focus on my patients, which is what I actually enjoy.

Losing patients along the way is inevitable for any doctor. How do you cope emotionally and psychologically?

Losing patients along the way is inevitable for any doctor. How do you cope emotionally and psychologically?

We get to know some patients so well that they are almost like family. It is very difficult for you not be affected emotionally. I remember one patient, Rachel, who died in her early 30s. As I wrote out the death certificate, I cried so badly everything was smudged.

But as doctors, we always try to maintain objectivity and some degree of detachment. Without that, most of us will end up being emotional wrecks and we would not be able to function.

To cope, I pray. I am a Christian, but I respect all choices – I believe people should be allowed to find peace in the way they feel is right.

How do you balance work and family? What do you do to unwind after work and on weekends?

How do you balance work and family? What do you do to unwind after work and on weekends?

I am glad to say that despite my long hours, I have managed to have a happy family life. I have four kids, two of whom are working. My kids are my friends. My daughter just got married and many of the people who came for the wedding commented on how close we are as a family.

I am very grateful to my wife for playing a critical role in making sure that they studied hard and also inculcating good values in them. They are caring, they have compassion for the poor, the sick and the elderly.

To relax, I like to read, to watch television and movies, to play some golf. Sunday is for church. After church, my wife and I try to catch a movie.

I like eating. I like Singapore hawker food – Prawn noodles, Teochew porridge, Samy’s Curry. In fact, every Saturday, my wife and I have lunch at Samy’s.

For Sunday dinner, all the Ang brothers rotate to host a dinner, either at home or outside.

What are your personal and professional hopes for the future?

What are your personal and professional hopes for the future?

Obviously we are all looking forward to better treatment and better outcomes. One of the biggest problems is how patients will afford treatment. Prices of drugs are going up rather than down. We want to have new drugs, but we also want patients to be able to benefit from new drugs. We think medical insurance is the way to go.

What would you wish for the public and patients to know more about cancer?

What would you wish for the public and patients to know more about cancer?

In the past, cancer was untreatable and terminal. Now, cure can be expected in some and treatment can be offered for control and prolongation of life in the rest.

When I first started doing oncology, you can count the number of drugs available on the fingers of your hands.

Today, thanks to chemotherapy, hormonal therapy, targeted therapy and immunotherapy, there are hundreds of drugs; the field has exploded.

There is so much money poured into research for the treatment of cancer that has yielded great advances that have impacted the lives of many cancer patients.

So people must never lose heart. Many people are now living in harmony with their diseases. If you are on treatment, you can enjoy a good quality of life and the disease can be in remission or under control, though this is not the same as a cure.

You were suspended for eight months and you are now returning to practise. How do you feel?

You were suspended for eight months and you are now returning to practise. How do you feel?

There is a bit of apprehension but I am also looking forward to it. I am apprehensive because I now realise that good intentions alone may not be enough.

Throughout my practice, when it comes to advising patients about what treatment to go for, I have always taken the very simplistic view – I imagine that the patient in front of me is my father, my mother, or my brother. I try to make it simple – if you were my father, I think you should go for surgery or this treatment.

I realise that now, the practice of medicine may have changed. For the large majority of patients, this approach is still applicable, but in the eyes of the law, that may not be the right way. Instead, what is required is to present all options, to help them understand, and let them decide on their own which option they want.

Moving forward, I am going to be a little bit of both. I am going to give patients options, and I will also try to guide them as to what I think is best for them. But I still plan to treat patients as family members as opposed to possible litigants.