Is Baby Getting Enough? 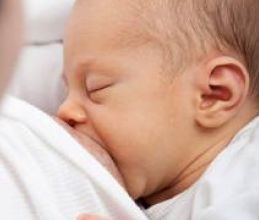 This is a common worry among new mums attempting breastfeeding for the first time. Unlike their counterparts who are fed formula from a bottle, there is no sure way of telling how much milk the baby is suckling if he is nursing directly. As a father once aptly put it, "if only the breast came calibrated."

As a general rule, babies who are fed on demand (as opposed to a rigid schedule) would receive sufficient nutrition from mummy. However, in the rare instances where baby is not drinking enough, it can lead to dehydration and failure to thrive, both of which can lead to serious medical conditions if left undetected.

You can probably tell if your baby is getting enough by observing your baby during and after a feed. A baby who is properly latched on at the breast and who suckles well for a continuous period of about 10 minutes per breast would generally be able to empty most (if not all) of the milk from the breast. After a feed, the baby would usually appear relaxed and satisfied. During a feed, you should be able to feel the let-down reflex and your breasts would also feel softer after nursing.

Most mums tend to get anxious when baby is weighed upon discharge from the hospital and find that baby has lost some weight. However,  it is not uncommon for babies to lose up to 10 percent of their original birth weight and then regain it by the time they're about 2 weeks old. After gaining back the initial weight loss, your baby should continue to gain weight.

Another reliable way of monitoring that your baby is getting enough is to keep track of the number of diapers a baby wets in a day.  In the first few days, she may have only one or two wet diapers a day. After your milk comes in, your baby should wet four diapers a day and then gradually up to six to eight cloth diapers a day (fewer if you are using disposables as they tend to be more absorbent). In the first month, your baby typically has at least three stools a day which may become less frequent as she approaches one month old. There is also no need for concern if she skips a bowel movement now and then as the number of wet diapers is a more accurate reflection of whether she is drinking enough.

Whilst it is important to observe your baby's development, it is also easy to get overly anxious and carried away with excessive monitoring. The truth is that a new born baby does not drink quite as much as most people commonly think. In fact in the first few days after birth, the thick but potent colostrum (estimated to be only about one to two tablespoonfuls on the first day) is really all that she needs during that time. In most circumstances, barring any medical conditions, baby should be getting enough if you feed on demand (i.e. as often and as long as she wants to) and as long as you eat and drink well and have sufficient rest.