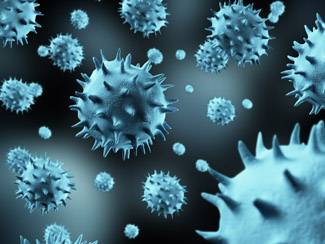 There are 3 types of influenza viruses – A, B and C. The type A influenza viruses are further classified into subtypes according to the different virus surface proteins (eg. subtypes H1N1, H2N2, H3N2).  Type C influenza cases occur much less frequently than A and B, and is not responsible for epidemics.  That is why only influenza A and B viruses are included in seasonal influenza vaccines.

One day before symptoms develop, and up to 5-7 days after the onset of symptoms.

Influenza can be spread in three main ways:

(1) Direct transmission (when an infected person sneezes mucus directly into the eyes, nose or mouth of another person);

(2) Airborne route (when someone inhales the aerosols produced by an infected person who coughs, spits or sneezes) and

(3) Through hand-to-mouth, hand-to-nose, or hand-to-eye transmission.

When a person sneezes, up to 40,000 droplets have been reported to be released into the air.  However, as most of these are large, they quickly settle on surfaces and are no longer airborne.  The smaller droplets however, can remain airborne for much longer periods.  Droplets 0.5 - 5 µm in diameter are small enough to be inhaled, and inhaler one single infected droplet may be enough to cause an infection.

Since the influenza virus can survive for some time outside of the body (survival time depends on factors such as temperature, humidity, types of surface etc), it can be transmitted by coming into contact with contaminated surfaces, such as doorknobs, toys, banknotes etc.

Influenza A and B infections occur all throughout the year in Singapore, with small peaks in the middle and end/beginning of the year.  In April 2009, there was an outbreak of novel strain of influenza A (H1N1) virus, 1st reported in Mexico.  It quickly spread to the rest of the world, and Singapore had its first reported case on 26th May 2009, in a student returning from New York.

The World Health Organization (WHO) declared an influenza pandemic on 11th June 2009.  By September 2009, it was estimated that Singapore had over 270,000 infected cases of H1N1, with a total of 18 H1N1-related deaths.

The WHO declared an end to the pandemic in August 2010.

Symptoms of influenza can start quite suddenly one to two days after infection. Often, the first symptoms are chills together with fever and body aches (myalgia), with body temperatures ranging from 38-39 °C

People with the flu should drink plenty of fluids and get plenty of rest.  Symptomatic treatment with anti-pyretics (eg. paracetamol) and anti-histamines are usually sufficient in the management of acute symptoms.  Children and teenagers with flu should avoid taking aspirin, because doing so can potentially lead to Reye's syndrome (a rare but potentially fatal condition).

Since influenza is caused by a virus, antibiotics are of no benefit, unless prescribed for the treatment of secondary bacterial infections.

Neuraminidase inhibitors (zanamivir and oseltamivir) if administered within 48 hours of the onset of illness, can reduce the duration of symptoms for both influenza A and B.

Amantadine can also shorten the duration and severity of influenza A, if used within 48 hours of onset.

The trivalent inactivated influenza vaccine is recommended annually.  It is prepared and updated regularly based on the predicted predominant strain of influenza A and B for the season.  In some countries, a live, intra-nasal influenza vaccine is available for healthy individuals ages 2 - 49 years.

Routine vaccination is recommended for all persons aged 6 months and older.  It is particularly important that certain groups, deemed to be at higher risk of complications, receive their influenza vaccinations regularly.

(i) Those at increased risk for influenza-related complications

• children 6 months to less than 5 years

• adults and children with chronic medical conditions of the pulmonary or cardiovascular systems, including asthma

• adults and children who have required regular medical follow-up or hospitalization during the preceeding year due to chronic metabolic diseases (eg. diabetes), renal, neurologic, liver or haematologic disorders, or immunosuppression (including that caused by medications or HIV)

• women in ALL stages of pregnancy