Singapore and Malaysia have one of the highest numbers of colorectal cancers in Asia. Not unlike that observed in Caucasian populations, more than 75 percent of colon cancers affect the left sided colon (splenic flexure, descending, sigmoid and rectum) with the rest occurring in the caecum, ascending, hepatic flexure and transverse colon.

Lifestyle
While smoking, lack of exercise and alcohol intake show tenuous links with colon cancer, increase dietary intake of fat and animal protein have demonstrated more consistent associations with Increase risk of colorectal cancer. Fibre and calcium ingestion seem to lower the risks. The evidence is by no means conclusive although various hypotheses have emerged to explain the possible mechanisms. 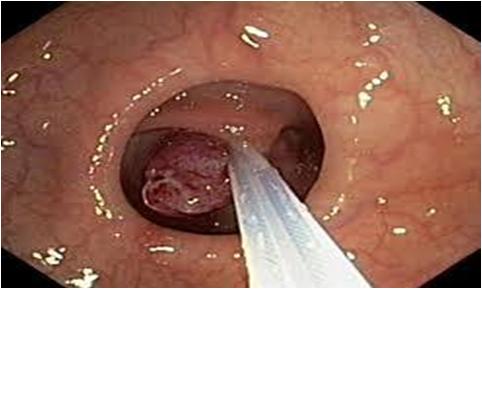 Colonic Polyps
Between 70 and 90 percent of colorectal cancers arise from polyps. Larger (10 mm or more) polyps have a greater potential for malignancy while small polyps (5 mm or less in diameter) have a negligible malignant potential.

The average time from onset of a polyp to onset of cancer, termed the “dwell time,” is 10 to 15 years. This dwell time appears to vary with the location of the cancer - longer in the distal colon than in the proximal colon.

In hereditary nonpolyposis colon cancer, a strongly inherited tendency for colon cancer is associated with far fewer polyps than occur in familial adenomatous polyposis. Up to 6 percent of colon cancers occur in association with this disorder, which is also called Lynch syndrome. Invariably, about 75 percent of patients with the Lynch syndrome will have colon cancer by the age of 65 years. 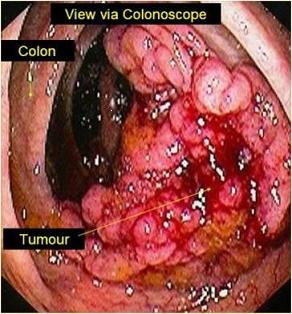 The early stage cancers are mostly diagnosed from screening procedures when patients are asymptomatic and this has contributed to better survival rates in colorectal cancers.

For the last two decades, prophylactic removal of colon polyps has been the standard approach to cancer prevention. Aggressive screening and polyps removal through colonscopy can reduce the rate of colon cancer development by approximately 80 percent.

Faecal Occult Blood Testing (FOBT)
Colorectal cancer bleeding may not be obvious to the naked eyes especially in the early stages. The advantage of this test is to pick up early stage cancers before patient presents with symptoms. It is also noninvasive and inexpensive.

Colonoscopy
Generally considered the gold standard for diagnosing colorectal cancer, colonoscopy has the main advantage of allowing diagnosis and definitive treatment of polyps.

Virtual Colonoscopy
Formidable developments in rendering 3-dimensional images using computer graphics have produced the technology of ‘virtual colonoscopy’. First described by Vining et al in 1994, virtual colonoscopy applies techniques for rendering complex images to spiral CT scan images. The computer then generates a retrograde intraluminal “fly through” navigation from rectum to caecum and repeats it in the opposite direction, allowing a detailed 3-dimensional view of the colonic lumen similar to real colonoscopy.

Once a colon or rectal cancer has been detected, preoperative staging, assessment of resectability, and assessment of the patient’s operative risks are indicated. The entire colon and rectum should be evaluated, usually with colonoscopy. Preoperative staging is done with CT scan abdomen and pelvis and chest Xrays or CT scan of lungs. Preoperative CEA, a cancer marker that can be detected in the blood, will provide an effective marker to monitor post- treatment disease recurrence in CEA-elevated patients.

The management of colorectal cancers involves a multidisciplinary approach. This includes surgery, chemotherapy and radiotherapy. However, recent advances in surgical techniques and chemo-radiotherapy have resulted in lower morbidity and better clinical outcomes.