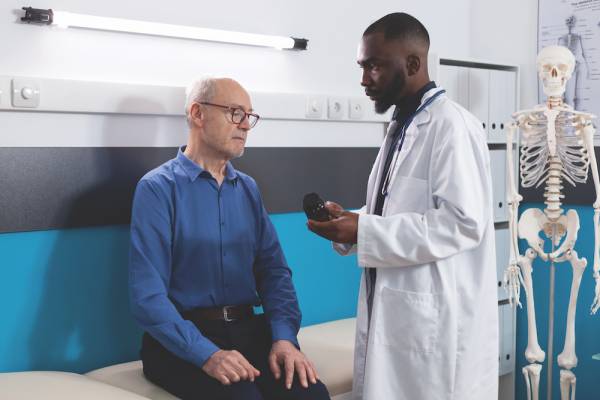 Prostate cancer occurs when there is uncontrolled growth of abnormal prostate cells in the prostate gland—a gland located below the bladder, near the base of the penis.

The disease, which affected 5,875 men in Singapore between 2015–20191, is more common in older men, with 60% of cases diagnosed in men aged 65 or older. Nearly all prostate cancers are adenocarcinomas, which are cancers that begin in the glands lining the inside of organs.

Localised prostate cancer is generally treated with surgery or radiotherapy. Both surgery and radiotherapy carry some risk of damaging tiny bundles of nerves that control erections, running on either side of the prostate. This can affect erectile function for many men following treatment.

The chance of preserving erectile function after treatment is influenced by age, pre-treatment sexual function, and whether a nerve-sparing approach for treatment is feasible. Younger patients have a higher likelihood of achieving erections after surgery, but it often takes a few months to up to two years after surgery for spontaneous erections to return.

For patients who are at high-risk of cancer relapse, and in cases where the cancer has spread beyond the prostate, androgen deprivation therapy (ADT) may be used for treatment. Unfortunately, long-term use of ADT will result in lowered testosterone levels, which may contribute to reduced sexual desire, erectile dysfunction, and shrinkage of the testicles and penis.

Infertility – a side effect of prostate cancer treatment

Prostate cancer surgery and radiotherapy invariably leads to infertility. Surgery not only removes the prostate and seminal vesicles that produce semen for sperm transportation, but also cuts off the vas deferens—or sperm duct—which are pathways between the testicles (where sperm are produced) and the urethra (through which sperm leave the body). Meanwhile, radiotherapy of the prostate and seminal vesicles impairs semen production, and may also partially damage sperm production in the testicles.

As prostate cancer generally affects older men aged 60 and above, many patients at this age do not put much importance on fertility after treatment. However, in the uncommon scenario where patients have a desire to father children after receiving a prostate cancer diagnosis, sperm banking can be explored as a means of preserving fertility before undergoing treatment.

It is key to understand that while patients may become infertile after undergoing treatment, a good proportion of patients may still achieve erections and retain sexual function.

For men experiencing erectile dysfunction, phosphodiesterase-5 (PDE5) inhibitors such as sildenafil (Viagra), are pills that can help with erections, especially if the nerves that control erections are able to be preserved. Other alternatives include vacuum assisted devices to create an erection, and penile implants.

After surgery or radiotherapy to the prostate, there will be minimal or no ejaculation. However, penile sensation remains intact, with a potential to achieve orgasms even if the erectile nerves are damaged during treatment.

A prostate cancer diagnosis, treatment and its side effects—including changes to your body and sex life—can greatly influence your sense of self and impact your relationships. A multidisciplinary approach to managing prostate cancer, that includes medicine, counselling and other support services, can provide you holistic care that can help you continue living life as normally as possible following treatment.